TACKLife Cordless Hedge Trimmer - 4 weeks of testing and our finding

TACKLife is a brand I have come across several times when we have been reviewing different garden products. So when we got chance to review the new TACKLife Cordless Hedge Trimmer, we decided to put it to the test and see how it compared to others models we have reviewed over the last year or two.

Before we get into the review, I would like to point out that we were sent this hedge trimmer for free to review by the manufacture. However, this does not mean we have to give a good review, even if the product is total rubbish, we will only give our honest option as our reputation is also at stake, we never recommend buying a product we would not buy ourselves.

In the TackLife review below, we explore the capabilities of this new to the market model and give our recommendation so you can make an informed decision about whether you should buy one or not.

Quick summary: The TACKLife Cordless Hedge Trimmer is one of the most affordable models available, to sum it up, we would not hesitate to recommend this model, its gets the job done and has more than enough power, even the more demanding hedges which are a little overgrown were easily cut, and the quality of the build is excellent overall as Tacklife have clearly used good quality materials.

How it compares to other models

When you compare it to the Bosch AHS 54-20, which is a very popular and equally impressive hedge cutter which we have always stood by. The Tacklife beats it on power as its 40v while the Bosch model is 36v, this probably doesn't make much difference all things considered. Battery capacity is better at 2.5Ah compared to Bosch at 1.3Ah, however Bosch does fully charge the battery in 45 while it takes around 60 minutes with the TackLife battery. Both models are very good but we think TackLife offers better value for money without compromising quality or performance. Its was also £65 cheaper when we did this review.

The question is, should you invest your money in the TackLife Cordless Hedge Trimmer, the answer is yes but read on to learn why and what makes it so good. Click on the buttons below to see where to buy one from and current prices.

When the TACKLife Cordless Hedge Trimmer arrived it was ready to use out the box and came with the battery almost fully charged so we were able to use it straight out of the box.

The first thing we noticed, was how good the built quality actually is, we have seen cheaper models before and they always look like the materials used are some what cheap looking and the build quality in general is usually poor. However, we think this model is just as good a quality, as the higher priced models from brands such as Bosch, Black + Decker and Ryobi, the quality is excellent and you can tell they have made the overall quality of the product a priority and used high quality materials. First impressions were excellent! 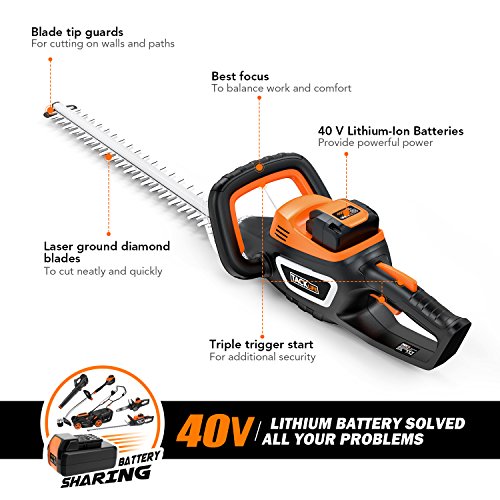 What's included in the box

The whole set includes the hedge trimmer tool, a Samsung 40v - 2.5Ah lithium battery, fast charger, blade protector which goes over the blade and instruction with the warranty card.

First, we will discuss the battery as this is one of the main features which really does  make a difference when it comes to the performance of any power tool.

The battery that comes with the unit is Samsung 40v battery, in theory, the higher the voltage the more powerful the motor will be, to give you an idea, Bosch do a cheaper cordless hedge trimmer which has a 12v battery, while Vonhaus known for quality affordable tools do a good model which is 20v and the much more expensive Bosch model is 36v. As you can see, TackLife wins on power on paper.

The other important battery specification is the capacity, this determines how long it can run for as this is how much power the battery can actually hold. The higher the Ah rating the better, this model comes with a 2.5Ah battery which is the same capacity as the more expensive Bosch model, this means this model does have one of the longer run times of any model. 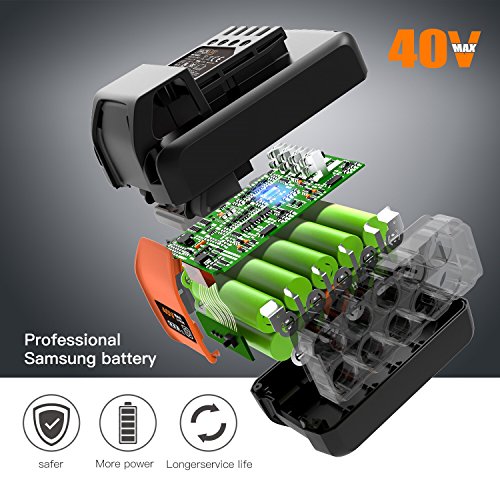 Lastly, one feature we really like is the power indicator feature on the battery that tells you how much power is left in the battery before it needs recharging.

The battery simply inserts into the hedge trimmer and automatically clicks into place, to remove the battery, simply press the two buttons on the side of the battery and the battery pops up. Simple as that.

Light weight at just over 3kg and well balanced

Its fairly light weight at just over 3kg with the battery, and feels well balanced, its very comfortable and we like the way the handle goes round the top and side, this made it very easy to use on its side.

Tested for over 4 weeks

I spent over 4 weeks testing this cordless hedge trimmer and used it on several different types of hedges and even borrowed it to a few friends and neighbours to try, not a single person reported any problems using it, in fact, most couldn't speak highly enough about its performance and overall everyone we borrowed it to thought it was excellent and would recommend it, two have even said there going to get there own. 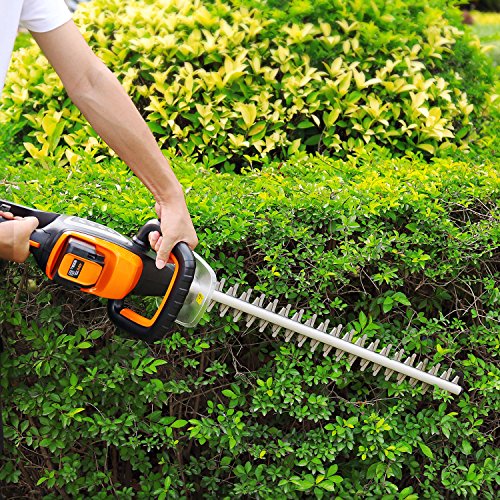 It cut through leylandii, laurels, hawthorn and some of the hedges with fairly overgrown and it even cut through the thicker branches without jamming. The blades are laser sharpened and are made from hardened steel.

It has a tooth gap of 20mm, so it can cut through any branches up to 20ml without any problems. One thing we did notice is that it starts a little slow, however after a few seconds it was running at full speed with no problems, its not a fast as petrol hedge trimmer I am use to, but we this didn't seen to matter as it cut through everything we tackled and you don't have all the engine maintenance you have with petrol models which is one of the biggest advantages of going for a cordless model.

The picture below shows the battery on charge and if you look closely, you will see a battery symbol under the 40V, this is the battery power indicator that lights up green to tell you how much power is left in the battery. This is a great feature, it takes around 60 minutes to fully charge the battery which is much better than some of the cheaper models which can take up to 5 hours and the running time is noted in the specification as 40 minutes, however we used it for a good two hours before it needed charging and we tackled some fairly overgrown hedges.

Tacklife also sell a cordless lawnmower which uses the same battery, it could be worth buying both if you need a new mower and then you would have two batteries so one can be charge while you are using the other in one of the tools.

We have not reviewed the lawnmower but we hope to have chance to soon so keep an eye out for that review.

We didn't know what to expect when the TackLife cordless hedge trimmer first arrived, it came in a strong box and was well protected but had no fancy marketing or pictures on the box. To be honest, we didn't set our expectations to high as the retail price for this model is also much cheaper than the Bosch model we had reviewed previously but its also not incredibly cheap either, cheaper usually means less performance and lower built quality. However, after trying it out we soon found this is actually an amazing model and one that can rival the big brands such as Bosch and Black + Decker. We think some of the larger brands could learn something from TackLife.

First off, the build quality is fantastic, no complaints and the performance was excellent. We did a lot of testing on a few hedges without any problems including an overgrown privet hedge and a laurel hedge, even on the thicker branches of the quince tree we trimmed it cut through easily with no loss of power at all.

Overall, we could not find a reason to not consider this model, the other big advantage of this model is that it comes with a 40v 2.5Ah lithium-ion battery so you get a better run time than some of the other models in the market. If your in doubt, then don't be, you want be disappointed and we would highly recommend this model to anyone who is looking for a reliable hedge trimmer, that is made to last.

Other reviews you may find useful:

Our website supports our amazing readers with countless hours of research and testing to help you find the best product so you don't regret making a purchase. You support us through our independently chosen links, which earn us a small commission and cost you nothing but helps support our research.