Why are my conifers turning brown?

As with any tree, there are different conifer diseases and conifer pests that gardeners need to be aware of. When your conifer starts to get brown patches it can be indicative of several problems and it isn’t always insect or disease related.

Conifers are susceptible to many types of diseases that can cause damage to varying degrees. In some cases, it causes mild discolouration that is simply unappealing, this will often naturally recover or fill in with new growth. If you do find yourself with brown patches you can sometimes tie in new growth to fill in the gaps.

A problem that is most commonly associated with Leylandii and Thuja hedging, however, it can also affect large specimen conifers. One of the most common causes is over-enthusiastic hedge trimming or trimming at an unsuitable time of year such as autumn, hot days or during periods of drought when the plant is under more stress than usual.

The problem is many conifers do not regrow from old wood so if you prune too hard you will likely notice brown patches. Our advice is to trim lightly, 2 to 3 times a year between April and early August and then give them a feed in the late winter followed by a mulch of well-rotted farm manure because this helps to retain moisture. If you do notice gaps and bare areas, try and tie new shoots into these areas. Usually, it can take a few years to fully recover, especially if you need to tie in new shoots.

Coniferous trees can be impacted by diseases like fungi, bacteria or viruses. Many fungi are microscopic and the only way to determine if you have an infestation or infection is by way of the symptoms exhibited. Diseases can strike at the needles, the roots, the trunk, even the stems of your tree. If you notice brown spots or other symptoms you can typically trim away any diseased portions, apply a pesticide (if needed) or simply remove a nearby plant or tree in order to make more room and allow for better airflow.

Needle cast refers to tree diseases that result in conifers shedding their needles. The symptoms of this disease will first appear on the needles where you will notice that they change colour and produce yellow spots which will eventually turn brown. You might also see small fruiting bodies on the surface of the needles. If this is left untreated it will kill the entire needle but you can rectify the situation by applying fungicides and removing any diseased needles as soon as you spot them.

Needle blight refers to diseases that attack conifers, not only at the needles but on the twig tips which results in brown spots. Brown patches on conifers will typically start on the lower branches and if you allow this to continue uninhibited for many years it will kill off the limbs and eventually the tree itself. There are things you can do to prevent this, such as using a copper fungicide spray.

Problems from fungal infections can also impact the rest of the tree, not just the needles. Cankers, dead or blistered areas on the bark itself will result in a waxy discharge. Blisters will show up on the branches in the form of a tumour and produce a yellow discharge. Much the same as other diseases you will start to see them on the lower branches as they make their way up the tree. With this, you want to prune any impacted areas immediately and use a fungicide. Coryneum canker usually affects the Leylandii cypress and the Western Red Cedar that many hedges are made up of, but it’s most common on large trees and is not often seen on small hedges.

Pestalotiopsis Dieback is another fungus, it is often seen during wet summers and attacks unhealthy or damaged conifers. Pestalotiopsis, as it is known, can cause severe dieback and a telltale sign is that areas on the tree begin to turn brown and you will see small black fruiting bodies scattered over the affected foliage.

There are even deeper problems that you might face, such as root diseases. These types of issues will get into your conifer by way of a wound, usually at the lower part of the tree, or by penetrating through the roots directly and this is why it is often referred to as root rot.

The symptoms will manifest in the form of needles dying off, bark peeling away and branches dropping off. Your tree will become completely unstable as the rot progresses and worst case scenario, the tree will have to be removed and replaced. If you have individual trees within a hedge that has died this is usually caused by root rot.

One of the most common causes of brown patches is the cypress aphids, in fact, the RHS and East Malling Research did a collaborative research project and found that this is the cause of around half of all browning cases on conifers. The first sign you will notice is brown patches beginning to appear with sooty mould, which actually grows on the sugary honeydew excreted by the pest. The problem is that these pests (usually large greyish greenflies) have already left before you notice there is a problem with your hedge. The best advice is to treat with a pesticide if you notice these aphids before they cause the browning by sucking the sap from the foliage. 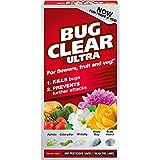 If you see your conifer needles turning brown the most likely reason is winter browning. These evergreen trees get their energy from the sunlight the same as any other plant and they require water, even in the winter. If the trees do not have a sufficient amount of water to last them through the winter they can dry out, at which point the needles turn brown. This rate of drying can be impacted by things like rapid temperature fluctuations, cold winter temperatures, or habitual freeze and thaw cycles from inclement weather, which unfortunately we are seeing more off in the UK. The part of the conifer facing the sun will typically brown in a more pronounced fashion.

This winter browning can be visible in the winter or in early spring. It is recommended that you water your tree in the autumn during dry spells in order to help combat winter browning. You should also add a little extra water during the summer, especially in August because this will give your plant enough water to store for the winter and prevent the stress and subsequent browning of the needles.

Another reason that you might see this type of discolouration is in conifers that are planted along the road, typically those used as a hedge or barrier between a street and your garden. The salt put on the roads during winter can actually cause your conifers to brown.

Preventing conifers from turning brown is typically as simple as keeping it well watered, pruned and spaced. If there is an inadequate amount of space between one plant and another it can inhibit the airflow which can increase fungal and bacterial infections. Without the pruning of diseased sections, it might be allowed to spread to the rest of the tree. So in all cases, it’s important to keep an eye on your conifers and make sure that they are well tended to.

Our advice is to trim hedges at the right time of year, between April and early August, avoid trimming during times of drought or hot weather, and mulch and feed in the late winter.

If you notice a bad infestation of aphids, spray with a pesticide straight away to help minimise any damage to the conifers.