Before I start on this Mastercanopy gazebo review, let’s just say that I have now been lucky enough to try a few of these pop-up style gazebos including some that are perfect for using as hot tub gazebos as well as hardtop gazebos and this model is the one I decided to keep for myself. They have come a long way in recent years and with this Mastercanopy gazebo, they thought of everything to make it easy to use, fast to put up and the quality is up there with the very best models.

I remember, many years ago, I was invited to a friends new moving in party and he had a gazebo, we had to join the poles, fit the plastic jointers, feed poles through the fabric, I think 2 hours later it was ready. This is when my journey to find a good popup gazebo began. I have been that impressed with this gazebo that I have put a video review together to show just how easy it was to erect. Think I can now do it in two and a half minutes on my own, around a minute with the wife, you can see the video further down in my review. 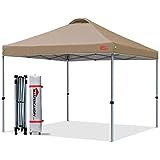 So I have probably had the MasterCanopy gazebo for a little over 12 months, in that time, I used it in summer to shade the kids, used it in winter to provide a little cover from the rain and in that time I have had no issues whatsoever. It’s never leaked, although I’m unsure of the Polyester fabric rating, it seems to be a decent fabric that has proven fully waterproof and is also UV treated, the fabric seems thick compared to some of the other gazebos I have seen.

I also like that I can literally erect it in 2 minutes on my own, faster with my wife but sometimes it’s just easier to do it on my own (if you know, you know). I am also super impressed with the build quality, the steel frame is substantial, reinforced joints are well designed, not cheap plastic plus the thumb buttons that adjust the leg heights and clicks the frame into place are really easy to use. I also like that it has air vents in the top and is around 9ft high inside the gazebo so there plenty of headroom even for taller people.

Granted, it was a little stiff the first few times but after this it’s easy. One last feature I do like, you can leave the canopy cover on when the frame is folded down, which makes it easy to pack away and even easier to open.

Where to buy the MasterCanopy Gazebo?

Don’t forget to watch my video review of the MasterCanopy Pop up Gazebo. I also show how easy it is to put up with one person

What do I think of the built quality

Let’s start with build quality as this is probably what matters most, just before how easy it is to erect. So as briefly mentioned, the frame itself screams quality, the mainframe is made from tubular steel and is super sturdy. The roof canopy frame is smaller gauge steel but still what you would call substantial for a gazebo.

What I really like though is how the frame unfolds, the way everything clips into place, nice large thumb buttons that don’t trap your fingers which was an issue I had with my previous gazebo.

When it comes to the cover, this is also really good quality, not to light but not to thick either, it’s actually made from Polyester which is 50+ UV resistant which for me is important as I have two kids plus is seems fully waterproof.

What it comes with, some of the included parts I don’t even use but they’re handy to have

I was going to talk about how to erect it first but I’ve got quite a few steps to explain it clearly so I’ll quickly tell you what’s included. First off, it comes in a nice quality carry bag with wheels, it’s heavy, it weighs around 16kg but I never weighed it to be exact.

However, this is where the wheels on the bag come in. Its also really easy to put it back into the back, even with the cover still on and folded down which is great. My last gazebo was a nightmare for getting back into the bag but with this is I’ve never had an issue, it literally takes me around 30 seconds.

It also includes 4 weight bags which you can fill with sand and can strap to the legs but I never used these, it also included 8 pegs, 2 for each leg, I usually just use these and its sturdy enough on the lawn. It also includes guide ropes but there have never made it out of the bag either.

How easy is it to erect

When I first got this gazebo, MasterCanopy said it could be erected in 1 minute with two people. Bearing in mind, this wasn’t my first time, it took me 10 minutes. I was nearly giving it 3 stars for ‘how easy it was to put up’. However, I used it a few times and now I have a completely different option.

To get to the point, with two people, it does take around 1 minute, especially after the first time as you can leave the Polyester fabric cover on when folded down, then you only need to pop it up again. On my own, it takes me around 2-3 minutes, 2 minutes on a good day, 3 minutes on a bad day.

How I go about erecting the MasterCanopy Pop up Gazebo on my own.

First I position it where I want it and use two pegs to peg down the leg to the furthest corner, the one that I won’t need to move, usually in the corner of the garden. Now, this step makes it much easier to do on your own.

Next, you pull the frame carefully by the leg which is adjacent to the one you fixed down with the pegs. open the frame until it is nearly fully open but not fully open.

With the cover in place and the frame almost fully open up, slide the top corners up until they click into position one by one. Pull the cover down neatly over the side of the frame. The frame should be fully open out and the cover should be tight.

All you need to do now is press the thump button on the legs and slide the legs out to the desired height. There is actually 3 height setting to choose from, the lowest is 64 inches, I’m 5’8ft and my head just skims the bottom of the canopy, next you have 68 inches and the highest setting is 6ft which gives you plenty of height.

Remember this height is the bottom of the canopy, inside, from the floor to the very top peak, it’s 9ft so there’s lots of headroom under the MasterCanopy gazebo.

You can see below I use it to keep the sun off the bouncy castle and kids on hot days and its just the right size.

Taking it down is also super easy, you just do everything in reverse, except this time if you prefer, you can just leave the cover on when the frame is folded down. The carry bag with wheels then just slides over the folded down gazebo no problem, is not one of them that takes hours to get it back into the bag either, it’s basically a 30-second job.

Out of all the pop-up gazebos I have tried, I would choose the MasterCanopy every time, most don’t even come close to the quality of the materials used including the steel frame and the ease of putting it up and taking down make it really easy to use.

It’s features like the large thumb buttons make it so easy to use too, and without trapping your fingers. Even if you want to get it out for a few hours, it’s not a big deal as it is so easy to do, literally 2-3 minutes later it’s up and it’s even faster to take down and pack away.

If you’re looking for a quality popup gazebo, I would seriously consider this one by MasterCanopy. I have the larger 3m x 3m, probably a little too big really but they also do the 2.5m x 2.5m and 2m x 2m for smaller spaces.

Read next: Also check out my review of the best leg weights for pop up gazebos here