How To Plant a Conifer Hedge – The beginner’s guide

Conifers are a wonderful option for a close-growing hedge that offers natural privacy, protection against the wind and a beautiful backdrop to your garden. Conifer shrubs and trees can be found in two varieties, the first of which is a container-grown conifer and the second of which is called rootball conifers.

The rootball conifers are grown in the ground before being lifted and sacking is placed around the rootball to hold the root system together. These are usually more affordable and often larger conifers are sold like this. The only downside is they are usually only available from October for a few months while they are dormant.

Pot grown conifers can be purchased all year round and are often more expensive. They are often also slimmer because they have been confined to growing in a pot, however, they often bush out once planted in the ground.

When you set about planting your conifer hedge you want to do it either in the spring or the autumn while the ground is still warm and they will put out some root before the winter really sets in. In general, spring is best, particularly early spring, because it allows the root system time to establish itself and has all summer to get established. Similarly planting in autumn allows the plants to establish themselves a little before winter time so that they can establish their strength long before their first spring.

You can plant pot grown conifer hedging throughout the summer without any problems and you will need to keep a close eye on watering for the first few months. You should never try and plant root-balled conifers in summer because they usually do not take and often die.

Before you start planting, you want to soak the root system of a rootballed or pot grown conifer in water. Fill a bowl or large bucket with temperate water and allow the plant to rest for around an hour. Once that is done remove it from the water and cut off any dead or damaged roots but make sure you only use sharp good pair of secateurs to do so.

If you are using a container-grown conifer all you need to do is remove it from the pot and carefully loosen the roots if they are very compact and prepare to plant.

Measure the depth of the plant’s rootball from the base of the trunk to floor level. Dig a trench that is the same depth as that measurement and a little wider than the rootballs. If you are planting a container-grown conifer simply make sure that the hole you dig is the same depth as the container in which the plant was purchased. What you want to avoid is planting them any deeper than they were originally planted.

Place the conifers inside the trench you have dug so that the top of the rootball ends up at ground level. Make sure you do not damage the root system as you are doing this. This will also give you the opportunity to plan where you are going to plant the conifers and how much space will be between them. In most cases, conifers should be spaced approximately 60cm apart, and you can read more on spacing conifers here.

Mix in organic compost into the soil that you removed from the holes you created so that you can improve the overall nutrient content and then fill around the conifer with the new mixture. You want to pack in this mixture around the root system in order to hold your conifers upright and in place, making sure you don’t damage the roots as you are doing so.

Once this is done you should saturate the soil with one good watering and make sure that you water enough that the soil fills in the spaces around the roots and removes any air pockets. You might find that as the water settles the soil level drops, in which case you might need to add a little bit of extra soil to compensate.

During these initial stages, you will need to water more heavily so that the roots are able to establish themselves, about three times per week but sometimes daily if it’s been very warm. The soil should remain evenly moist but not too wet. Remember to water regularly for the first few months and keep an eye on the watering thereafter for the next 12 months. After this, they generally look after themselves once the root systems are established. 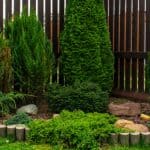 How To Grow and Care For Conifers 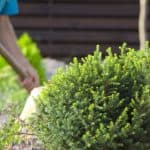