Lilies can be one of the most exciting plants to grow from bulb. They can grow to be particularly large and aromatic making them so stunning and popular. Of course if you are planning on having any lilies in your home you can choose to purchase pre started lilies or conversely, grow them from forced bulbs. Lilies prefer well-drained soil in a sunny spot, if you have clay soil that is often water-logged it can be better to grow them in pots and place them around your borders.

Plant in full sun although some types prefer light shade

Before you start planting it’s important to pick the right location. Lilies are perennials which means they will come back every year. Take into consideration where you want lilies to reappear time and time again in your garden. Pick an area where they won’t be disturbed. If you want to grow very specific colours, like pink, they will grow much more vibrant in light shade so you might want to find a place with light shade. Most lilies, however, will grow well and prefer to be planted in full sun.

The next consideration is spacing especially if you’re going to grow more than one. Most people grow lilies in small clumps, three or four together in one area so that they make an impact and are not just dotted around. Of course, you can spread them out into individual beds and borders having them flourishing in between other plants. No matter how many you plan to put together, dig a hole for your group that is at least 20cm deep. If you’re going to plant a lot of them nearby it might be better to simply dig one long trench rather than multiple holes and then drop them in, where you want them to be, filling in the space around them.

In the holes or the prepared trench, add a layer of approximately 5 centimetres thick with grit. Drainage is particularly important and your lilies will flower much more effectively and live significantly longer if they have their feet in the shade but the flowers in the sun and are planted in soil that is free-draining, they hate to be in waterlogged soil.

When to plant lily bulbs

In terms of when to plant, you can plant lilies at any point during the autumn, the winter, or the very beginning of Spring. As long as you get them in the ground before March they will do just fine.

How to place lilies in ground

When you place them in their respective holes make sure the pointy end is facing upright. If your bulbs already have a sprout and its curved, don’t worry they will be just fine. You can simply place the sprout just above ground level. Within a few weeks, they will straighten itself out.

Mark where they are planted to avoid accidentally digging them up

It might do you some good to mark where you have planted them in your garden so that when they are not in season you won’t accidentally dig them up or harm them my mistake when weeding or planting other plants.

Once they are in place it’s important to protect them against slugs which will probably be the biggest nuisance you will face but the red lily beetle can be a big problem too which we discuss a little further down.

If you are growing lilies from bulbs you can, of course, plant them in containers. Use a loam based compost such as John Innes potting compost and mix in some grit with the compost and feed every two weeks with a liquid potash feed during the growing season.

Otherwise the same general spacing and depth rules apply in a container as they do in the ground.

Watch out for lily beetles

Once you have planted your lilies in bulb form, be on the lookout for the Lily Beetles once the lilies start to shoot through the soil. The Lily Beetle will appear on the foliage and flowers in springtime and will often strip away every bit of foliage leaving the stems bare, they will even eat the buds and flowers. When you see them, remove them by hand, it’s well worth checking daily as they can do so much damage in such as short period of time. They are at their most active in April and May so keep your eyes peeled. You can also look out for the grubs before they turn into beetles but there usually hide on the underside of the leaves, the grubs to eat the leaves and these are best controlled with a pesticide.

Once your flowers start coming in you can of course cut them and bring them inside just make sure you leave enough of the stem and the foliage so that the plant is able to continue photosynthesis and store energy for dormancy.

What to do after they finished flowering

Once they have finished flowering its important to remove the spent flowers and seed pods and then wait until the stems turn yellow and brown in autumn and die back naturally, at this point you can cut them back to soil level but not before. If you cut back the foliage to soon, this can weaken the bulb and it may not flower the following year. 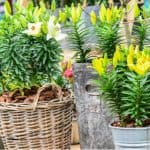 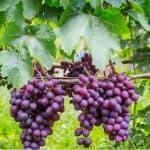 Growing grapes – How to plant, grow and train grapes vines