If you are growing Lillies or Fritillaries in your garden you need to be on the lookout for the Red Lily Beetles and their grubs. The Lily Beetle and its larvae are insects that eat the leaves and can cause immense damage to Lillies, stripping almost all the leaves off Lillies. The adults are typically found on the plants themselves, and sometimes on other plants but the eggs are laid inside the space where the Lillies are growing, resulting in the development of grubs just a short while later.

Not only do these beetles and their offspring ruin the appearance of your plant but, severe attacks in the early summer on your plants can produce undersized bulbs which might not flower in seasons to come. Since the 1990s the Red Lily Beetle has been an issue in British gardens all over the UK. Thankfully, there are ways that you can control both the adults and grubs.

How to spot the signs of Red Lily Beetles

The young larvae will eat the underside of your leaves. The evidence of this consumption is brown patches on your leaves that look like they are dying. Unfortunately, as the beetles get older they eat the entire leaf, beginning at the tip and working all the way back to the stem. Worse, still, they will also eat the petals, the seed pods and the stem.

How to control Lily Beetles

It is important to control the Red Lily Beetle when you see them on your plants because stripping away the foliage from your plant will affect the overall health of your Lillies. Moreover, the adult beetles might overwinter on another plant so you can’t get rid of them unless you do so during the growing season when they are much easier to spot.

There are two ways to dispose of the Red Lily Beetles.  Effectively removing the beetles at all ages requires a combination of the two.

Non-pesticide control requires you to inspect your plants regularly from the end of March onwards, removing by hand the adult beetles, larvae and any eggs that you see on your plant.

Similarly, there is one variety of Lily called ‘The Defender Pink’ which is actually thought to repel Red Lily Beetles. Basically, the best way is to check your Lillies every day and see if you can spot the adults. Be careful when removing Lily Beetles because if they fall off they will land on their backs and become very hard to spot as they are black underneath and pretend to be dead. 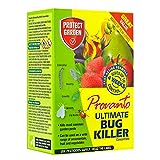 Pesticide control is much more effective on the larvae than it is on the adults because the adults can fly to nearby gardens and then come back later. There are organic contact insecticides that can give adequate control. For serious problems, you might need insecticides that contain pyrethroids such as Bayer Provado Ultimate Bug Killer, this is available at most good garden centres and nurseries. You need a Systemic insecticide which basically means that it is taken in by the Lillies and when the beetles or grubs eat the leaves they are poisoned and die.

When using any commercial product be sure to follow the instructions appropriately. You should not spray plants that are already flowering because it does pose a danger to any pollinating insects that come by for a visit and it can sometimes affect the open flowers and they don’t always open properly. This is why the earlier you attack the problem, the more options you will have.

The Red Lily Beetle can live as an adult in soil, fallen leaves, or any other sheltered area and not just in your garden but in any garden in the nearby vicinity. To that end, it won’t do you much good to try and treat the soil directly below the Lily because these insects could be living somewhere else and just coming to graze on your plants.

The eggs are typically laid on the underside of leaves sometime between April and the middle of summer. They will hatch and start to feed as larvae and once they are fully fed they begin to pupate and emerge from the middle of summer onwards as an adult. By not tackling the issue early on, the adults can hang around in protected areas and come back the next year to feed once more.

How and when to prune tree peonies