Lilies are stunningly exotic flowers with their tall stems which thrive in areas with full sun or partial shade, consistent water levels and good air circulation. Care for lilies is on par with that of most bulbs and perennials and when it comes to grooming them after they have bloomed, very minimal pruning is required.

After your lily flowers have started to fade, you should remove them straight away. If you allow them to remain, the spent blooms, like most flowers, will convert into seeds and on lilies, this is best avoided. Your lilies have a finite amount of energy and a great deal of it gets diverted into producing seeds. If you prevent this from happening, your lilies can put that energy into producing more flowers.

What to do with lily seed pods

If your lilies have finished flowering and you are left with just the seed pods, these can be removed just leaving the stem until autumn or spring when it can be cut to just above the soil.

To remove the spent blooms, you can simply cut them off but its usually fairly easy just to pinch them off by hand. Alternatively, you can bring a bit of nature indoors by cutting the stalks as soon as your flowers are about to bloom, and using them for indoor flower arrangements. If you opt for this route, be sure to store them in cold water with indirect sunlight and they will last for days. The downside of this is that the bulbs don’t usually do much the following year as there is little growth to die back and give the bulb the energy it needs for the following year.

Whether you cut the spent blooms and discard them, or cut the stalks and bring them in your house, you should always disinfect the tools you use each time by wiping them off with a mixture of 9 parts bleach to 1 part water or rubbing alcohol. Wipe down the blades between each cut. This will thwart the spread of disease.

How to prune lilies after blooming

While snipping away at spent blooms, you might be tempted to cut back the foliage too. But it is in your best interest not to. Even though the foliage turns yellow, it is serving a purpose; at this time the lilies start saving energy in the bulbs in preparation for the upcoming growing season. If you cut back the yellow or faded foliage, you deprive your lilies of much-needed energy. At the end of autumn or beginning of spring, once your plant has died back completely you can snip it back, but not before.

Tangentially, leaving the growth in place, no matter how discoloured, can help you identify its location the following spring, so that you avoid accidentally digging them up. Lilies are made of soft bulbs without any protective shell, so even a minor nick by a shovel can seriously damage them. For that reason, waiting until the start of spring is recommended for those who don’t mark where their lilies are, or who regularly garden around the lilies.

What to do with potted lilies after they have finished

If you have lilies grown in pots, you go through the same process of removing flowers and seed pods and cutting back the stems in autumn or spring once the stems have turned yellow and brown.

One of our favourite places to buy and discover new lily varieties is crocus.co.uk – check them out now! 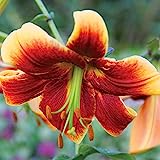 Pruning our diseased stems from lilies

There is one exception to the rule of removing the foliage and it has to do with disease. As is the case with all plants, if you notice any type of infection, disfigured or withered leaves, prune them and discard them. If you see evidence of mosaic virus, mottled leaves that are spotted, dig up your Lily before the disease spreads to nearby plants. If you see signs of root rot, you can try to rectify the poorly draining soil but you may very likely have to remove the entire plant and try again.

Overall, there is very little garden maintenance required when it comes to pruning your lilies but there are some exceptions and the sooner you catch these exceptions and deal with them, the less likely they are to infiltrate the rest of your garden.

Don’t forget to be on the lookout for the red lily beetles that with strip your lilies of all their foliage. You can learn more about these beetles in this article

« Pruning woody lavender plants
How and when to prune grapevines »

Top 8 Best Bird Baths with some of our favourite picks

Top 8 Best Trough Planters To Brighten Up Your Garden