The Christmas Cactus gets its name because it is a cactus traditionally bought in December (around Christmas time) when the flowers are in bud or full bloom, meaning they also make excellent gifts at Christmas. That being said, they are also available all year round at local garden centres and nurseries, but you will need to grow them correctly to get them to flower successfully, which means they need to rest periods in a cooler room and we will discuss this further down. These cacti are fairly easy to grow and care for and overwinter, and are sure to add some colour and light to your home.

When it comes to growing the Christmas cactus, you need to treat it the same as other epiphytes, or plants that typically grow on other plants. It, therefore, needs sufficient drainage considering that in their natural environment the water would never stay stagnant but run right off and onto whatever plant or rock, the cacti are growing on below.

They need a humid environment that mimics their jungle habitat

Opposite of desert cacti, these are tropical and they need a humid environment that mimics their natural jungle habitat. This means giving them plenty of light (but not direct light) and a humid environment. Growing them in your home, you need to be mindful of whether your air is dry or not and then compensate by misting the cactus now and again. Alternatively, you can create humidity near the plant by filling a tray or saucer with pebbles or small stones and filling the tray with water, then placing the cacti pot on top of those pebbles.

As already mentioned, the position where it is placed should be cool but bright, and not in a front of a window that is facing the sun. We also recommend you don’t place it near the radiator or fire because this will also cause them to quickly dry out. Originally from the rainforests of Brazil, they naturally grow in forested, shaded conditions so you need to replicate these conditions at home as much as possible.

When most people buy a Christmas cactus it is likely in bud and ready to flower, sometimes even already flowering, and you want to water it regularly but avoid feeding. After they have finished flowering, usually around January, the cacti will need a little rest and mimicking their natural environment will help them recover after their flowering period.

After flowering, reduce watering and place in a cooler room until late March

Once the flowers have finished, move your cacti to a cooler place, with temperatures that ideally range between 12-15 degrees if possible. This can be easily done by moving it to a cooler room where you might not have the heating on as high or on at all. Keep it there, watering it just enough to prevent the soil from drying out.

From April to September, bring them into a warmer room and increase watering and feeding

Come April (or September, if you are resting it in autumn) bring it back out to a warmer spot between 18-20 degrees and this is when it will start the process of forming buds again. At this point, you can start to increase watering and give it a liquid houseplant feed too. This is when the plant is growing and it needs nutrition to do so, which is why it’s the best time to feed them.

You will notice buds beginning to form, at which point, you want to move it back into the cool place and give it a second rest where you also reduce the watering, as you did during its first rest.

Buds should be fully formed around November, they can be taken out of rest again and put on display in a warmer room

Once you notice the flower buds have fully formed, usually around November, put it back into a warm location and enjoy the floriferous show.

If you do this well, the flowering period should last for 2 months on average so they do give a long-lasting show that many indoor plants struggle to compete with. The individual flowers will not remain in place for long but you will enjoy a lot of them.

These plants require little or no pruning but overgrown plants can benefit from the removal of some old stems and by removing the tips of stems. If you have had one for a long time, it might have become congested with age or leggy and you can help alleviate that by removing some of the tips alongside the oldest and most damaged of stems.

When pruning to remove old stems, you always want to remove entire segments of the stems back to soil level so that the plant maintains its aesthetic appearance. Pruning is best done after flowering and before the formation of new buds has begun.

Christmas cacti prefer to be a little snug in a pot so they ideally need to be repotted every two years to get the best displays. The first thing to note is that Christmas cacti do not like to be potted into pots that are too large, this will cause them to rot and plants can become limp. Ideally, they need to be repotted at the beginning of the growing season which is around March, planted into a slightly larger pot using cactus compost.

The good news is that the Christmas Cactus is virtually pest-free except for mealybugs, however, even these aren’t too common. Some of the more serious problems, such as none flowering plants or shrivelled leaves, are usually related to cultivating and physicality. If the plant is too hot or in direct sunlight constantly, the stems will usually start to shrivel up. The stems can also become discoloured if they are scorched as well.

In some circumstances, the fact the plant isn’t flowering could be the result of temperatures or shorter daylight hours. If the temperatures are too drastic– to warm during the day and cold at night, it can result in flower buds dropping or not even forming. This can also come about because of overwatering.

All these problems can be overcome by simply placing them in a favourable condition such as in a room with plenty of light but not in direct sunlight and not in a room that is too warm or too cold. So this means at around 12-15°C (55-59°F) after flowering when resting and 18-20°C (65-69°F) over summer.

If you want to propagate from a particularly successful plant, you need to take the cutting one month after your cacti have finished flowering, which is usually some time in February. Another good time to try is around May after the first rest when they begin to actively grow again.

The cuttings should be 2-3 segments long and once you have the cuttings, place them in a cool place for a few days so that they dry out. This is something you only really do with succulents and not with most other houseplants. Place them in the same cool location where you are allowing your original plant to rest and over the next couple of days, the cutting’s basal wound should have healed and is now ready to pot on.

Place them each in small pots with a 50/50 mixture of cutting compost and sharp sand to improve drainage and stop them from rotting off. Now plant the healed ends into the compost, just enough to keep them upright but they shouldn’t go any deeper than 1cm into the soil otherwise they will rot.

Place the pots somewhere bright and cool but not in direct sunlight. After about 12 weeks (or sooner in some cases) the roots will fully develop and you can transplant them as necessary into larger pots or grow them on further if they are already in their own pots. 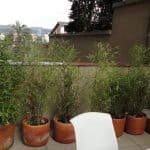