If you have a Christmas cactus you want it to look its best and form lots of flower buds that in turn produce a mass of flowers over Christmas. You put a great deal of time and effort into moving it back and forth between cool and humid conditions, allowing them ample opportunity to recover and reflower the following year. But then again, if you are experiencing problems, it can be frustrating figuring out why, however, it usually comes down to the growing conditions.

Below we go over some of the common problems and how to resolve the issues, these are listed below. The good news is that they are generally pest-free so that’s one cause you can rule out straight away.

When you see the precious buds dropping it is often the result of fluctuating temperatures, either being too hot during the day or too cold during the night. So you may need to relocate your Christmas Cactus.

However, if you are overwatering your cactus this can also result in bud drop. The first thing you need to do is reduce watering if you suspect you are overwatering. During bud formation (which should take place from late September onwards), and when they are resting for the second time, they should be watered less frequently, ensuring they aren’t allowed to dry out and kept at a cooler temperature of 12-15°C (55-59°F) if possible.

If you are experiencing poor flowering or no flowering, it is likely the result of the temperature and seasonal conditions. These plants are from Brazilian forests so the conditions in which they are grown need to mimic that.

However, when days get shorter you might have to compensate with artificial light, and this is something it may simply not be enjoying. Moreover, when temperatures do not mimic those of the season (it stays too warm inside during autumn rather than dropping below 18 degrees Celcius at night) it could impact the formation of flower buds. Similarly, if the temperatures are too high in autumn, it can delay flowering.

If your plant is wilting and shrivelling up at the stems it can be a sign of root rot, which is almost always brought on by either overwatering or underwatering. However, on occasions, it can also be a sign that your plant has been in a location that is too sunny or too warm. One way to differentiate is to look for signs of scorched stems. Scorched stems result from locations that are too warm and sunny, and usually appear when they are positioned in direct sunlight.

Another cause is when they have been potted on into a pot that is too larger. This can cause root rot because they prefer to be snugger. See our guide on repotting Christmas cactus here. The simple solution is to remove the plant from its pot and knock off as much of the soil as possible without disturbing the roots and then pot it back into a smaller pot. Potting into a pot that is too large can also cause poor growth in general. 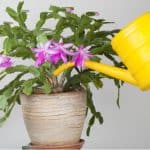 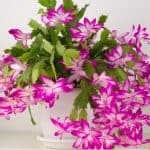