Part of the epiphytic cacti family, Christmas Cactus is the most commonly known name for them. They are a striking and exotic looking type of houseplant and the botanical name is ‘Schlumbergera’.

They produce red, pink, white or purple flowers from around November and often well into January. This is where the name ‘Christmas Cactus’ derives from. Easy to grow and care for, they make excellent seasonal gifts and are very easy to propagate and take cuttings from. They’re so easy in fact, they make great plants for children to grow and even help take the cuttings.

When to take a cutting

Take cuttings around May when they are actively growing to ensure that the plant is healthy.

How to take a cutting

Taking the cuttings is incredibly easy, and as long as they don’t rot off, they usually nearly always take root.

After the cuttings have taken root and have nice healthy strong roots they can be carefully potted on. Either use cactus compost or mix 50% compost with 50% grit sand and pot on into either a 7cm or 9cm pot and place in a light position (as before) but not in direct sunlight. They will probably need potting on every year around March into a slightly larger pot as they grow.

They originate from jungle-type environments and grow attached to trees, similar to the way orchids do. As such, they will grow in a partially shady spot but prefer a bright position but not in direct sunlight as it damages the leaves.

When they are actively growing from around March onwards, the soil is best kept moist but not too wet and they prefer a humid environment. To help achieve this, fill a saucer with small pebbles and fill with water to just below the top of the pebbles and place the Christmas Cactus on top.

After flowering, usually from around February it is time to move the plant to a cooler position if possible, ideally around 12-15°C (55-59°F). Reduce watering and only water when the soil becomes drier and this may only be once every few weeks. Around March water again as before keeping the soil moist but not wet.

Feeding – Feed plants when they are actively growing from around March to September with any houseplant feed as directed in the instructions.

We recommend that you move your plants outdoors once the risk of frost has passed, this is usually around the end of May in most parts of the UK. Growing them outside during the summer will help the new growth to mature and will encourage more flowers in winter. Remember to choose a shady spot where they are protected from direct sunlight.

Around September the buds should start to form, bring them back indoors into a cooler room and reduce watering as you did after flowering. Once the buds have formed move them back into a warmer room, ideally around 18-20°C (65-69°F) and start watering again keeping the soil moist.

If you follow these few steps you should be rewarded with masses of beautiful flowers. 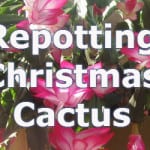 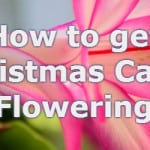 How to get a Christmas Cactus flowering