When you think of bulbs, you think of spring and summer, bright colours that litter the garden, especially in spring. But what about autumn and winter? They deserve their fair share of colour and blooms too. Thankfully, there are many blooms you can plant to give your garden which is often overlooked during these months some added bright winter pop.

Below are our top seven autumn and winter flowering bulbs:

These plants can be cultivated outdoors or in greenhouses. Every species offers 6 narrow petals that have very prominent stamens. The leaves take on a strap-like appearance and are produced either after the flowers or with the flowers. The leaves will appear in spring and die down by the end of summer, with the flowers coming forth in the autumn. There are varieties that do quite well outside as long as you give them sunny, sheltered positions either at the foot of a wall or in an open border.

If you have a shaded area in your garden you can grow them but you won’t get any flowers. More importantly, they don’t do well if they have to compete with other plants nearby for nutrients, which makes them perfectly suited for container growing. One of the later flowering varieties for autumn colour is Nerine undulata ‘Flexuosa Group’.

This variety will spring forth in autumn, right around the time when all your other plants have finished blooming. It truly produces a captivating sight when you grow large quantities at once. The flowers sometimes open before the leaves if not concurrently. You will see rich magenta or white shades depending on the variety you pick. They are quite small spanning about 2.5cm and rising above the foliage on stems that are no more than 10-15cm tall.

Some versions are richly fragrant and others feature graceful, upswept petals that get darker closer to the mouth. The foliage is what lends the nickname Ivy-leaved Cyclamen to the plant because it takes on ivy shapes with shades of dark green, and silver. The best part is the foliage is quite long-lasting and will produce an evergreen groundcover throughout most of the winter and well into spring so you can add rich shades to your garden without a great deal of effort.

This is one of the most robust and easiest of the family to grow. It will self-seed if left undisturbed and naturalise. It has received awards for its outstanding qualities and doesn’t require any weeding or deadheading. It’s very tolerant of drought and dry soils as well as deer, although keep your eyes peeled for mice and squirrels. You usually buy them as growing plants in trays or single pots later in the year.

Commonly referred to as the Persian Violet, this award-winning early bloomer brings about heart-shaped, glossy leaves, however, these are not nearly as attractive as the small, showy flowers that come in quite literally any shade from white all the way to rosy-purple. They will add a lot of cheer and beauty to your garden at the end of winter long before any other plants arrive. In fact, the blooms are so abundant that you won’t even see the leaves underneath. Still, some of the leaves are quite decorative and you can find dark green varieties that are adorned with nice silver patterns.

Slightly larger than a few counterparts on this list, this species will grow between 7cm and 15cm wide and tall. It’s a very strong plant that can withstand the coldest of English temperatures. It’s also a self-seeding plant so it will naturalise very quickly and over the years spread effectively so that every winter brings forth an array of cheerful colours.

Very low maintenance it doesn’t need anything like deadheading or weeding. It just needs well-drained soil with partial shade and some mulch to cover it over winter. It looks fabulous when combined with the snowdrops because of the way the flowers take on a winged, butterfly shape that contrasts the drooping bell-shaped flowers of the snowdrops. They also work well when planted in winter containers and hanging baskets too.

While most people consider the crocus as the tell-tale sign of warm weather approaching, it is the ‘Winter Aconite’ that flowers even earlier. Winter Aconites will pop up through the snow and they won’t be frightened off by English frost. As soon as the weather changes, their buttercup like blooms (as shown above) will arise and greet any who took the time to cultivate them.

Winter Aconite bulbs are tubers, which means they store moisture and food in the tuber for hibernation. They need to be deeply planted to protect them from the winter weather, but they are small so you can plant lots of them in one garden bed. Come to the first start of spring you will notice their green shoots poking through the landscape, followed by their small yellow flowers. These are small too, no more than 3cm across and resting just 8cm or so above the ground. A few days later these blooms will fade but you will be left with the foliage that remains present until your other spring flowers appear.

As the snowdrops sprout from the ground, look for their shoots peeking through, preparing for spring. Even in winter, the sunlight heats the tips of the snowdrop leaves through the snow, leaving them warmer than the area around them, and as a result, they can push their way through the snow and shoot forth bulbs with 2 or 3 narrow leaves and one white bloom. These are which deer will leave alone.

They are small, bell-shaped flowers that come in white, some with green tips and others with green markings. Each flower has two whorls with three lobes. They are sufficient in attracting pollinators to your garden, for example, bees at the beginning of spring because their blooms appear between February and April.

Small in size, spanning between 15cm and 30cm, don’t let their size fool you. You can grow them in containers, planter beds, or wild in the garden. If you grow them in your garden, directly in the ground, you won’t have to do much in terms of amending the soil. These little guys are quite strong and fend for themselves. If you grow them in a container, a potassium heavy fertiliser can help them.

Note that snowdrops take one year to establish themselves, but by the second year they will start to spread on their own, producing more flowers and multiplying. We recommend buying them in leaf in pots because it seems to be a more successful method than planting the bulbs.

Just when you think you can’t take another bland, white winter day, your Crocus will push through the snow and bring with them some delightful blooms. There are varieties like the Snow Crocuses which are the first to produce flowers, all the way to the oversized Dutch varieties, but even here, oversized means no more than 10cm. In terms of colour, you can choose purples, blues, oranges, reds, yellows, pinks, and more. Any of these stand out against a white, bleak landscape of winter.

What’s more, most have strong scents that are sure to drive bees to your garden as early as February or March. Crocus bulbs naturalise so they will spread on their own, returning year after year, and eventually put on an even larger display. For those who have animals nearby, rest assured rabbits, squirrels, and deer typically stay clear of them.

Named after the Greek Goddess of rainbows, the colours brought about by the Iris flowers are guaranteed to please any eye. There are so many hybrids out there that any colour or preference can be found. Irises can be found in many sizes, both short, 15cm height varieties and long varieties that are taller than 1 metre.

No matter the variety you select they need full sun for at least half of the day. There are a few varieties that will tolerate shade, specifically the Siberian varieties, although they won’t flower as well. If you pick reblooming varieties, of which there are many, they will produce flowers in the summer and in the autumn so you get the best of both worlds.

In terms of colours, you can pick white, black, lavender, purple, yellow, and anything in between. You can choose from rhizomes or bulbous options. The rhizomes come in bearded, beardless, and crested forms. The bearded are the most popular because of the white hairs that fall from the centre and the surrounding petals and these are likely what you have seen if ever you stumbled upon Irises in a garden.

The beardless Iris comes with smooth falls and is used for mixed borders with milder climates. Crested can tolerate partial shade. The bulbous versions include the Dutch hybrids and all smaller, dwarf varieties that bloom earlier and are best for pots. 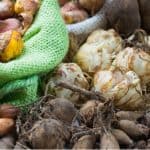 When to plant summer flowering bulbs and our favourite picks 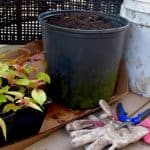 How To Take Fuchsia Cuttings – Step by step