Hydrangeas are beautiful plants with stunning flowers. It is the flowers that lure most people to them. But what happens when your hydrangea stops flowering?

There are several things that can result in a lack of blooms ranging from too much fertiliser, frost damage, or more commonly improper pruning. You know better than anyone what is the likely culprit, based on your maintenance habits. However, in most cases, as mentioned, it is simply an issue of pruning too much or at the wrong time of the year which results in the removal of the growth that will produce the flowers that year.

With a hydrangea, pruning at the wrong time can mean accidentally cutting off the wood on which your blooms are supposed to grow. As a rule of thumb, many hydrangeas can go quite some time without pruning, even if they appear dead in the winter. It is best to prune rarely if you want to encourage better blooms.

Learn how to prune hydrangeas correctly in this post

There are three main types of hydrangeas:

It’s worth noting that climbing hydrangeas should be pruned after flowering in summer.

Those that flower on old wood

If yours is part of that first group which is the hydrangea type most people have with the big mop heads, and you give it a trim, you might just cut off the growth it needed for flowers. These plants should only be pruned after they have flowered, and really only be trimmed right below where a flower once stood. If you prune them in spring you may well be removing the stems that will produce that years flowers which is a common mistake.

Those that flower on new wood

If yours is part of the second group, pruning should only take place at the start of spring just before they shoot, because the plants become dormant in the autumn. These hydrangeas because they flower on new growth can be cut back hard, almost to ground level which often encourages bigger blooms.

If yours is part of the third group, it should be pruned the same as the first group, only after flowering and only right below where a flower once was.

The wrong pruning and your flower production go in the bin (literally).

To much feed can cause flowering problems

Aside from pruning issues, be aware of how much fertiliser you are using, when you are using it, and whether your particular variety of plant needs it. Again, too much can cause a lack of flowers as it causes the plant to focus on produce foliage instead of flowers.

Make sure the hydrangea is spaced about 1.5 metres apart from others so that it has space to grow and flourish. If they are too cramped, they won’t have the space to grow healthy enough for stunning blooms.

By following all of these tips and ensuring you prune your variety at the right time of the season, you can bring back the blooms that you once lost. 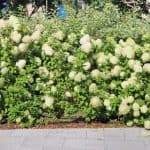 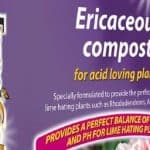