The difference between climbing and rambling roses

Many people wonder whether rambling or climbing rose bushes are the same. However, there is a key difference that makes them stand apart with the flowering time and flowering frequency being the main difference most associated with them. Most rambling roses flower once around June, climbers often flower through summer but don’t usually have the same impact.

Other noticeable differences to summarise include:

The biggest difference is that rambling roses will flower at one time during the year, usually around June and will flower for only a few weeks with the exception of odd varieties. Climbing roses, by comparison, will typically repeatedly flower throughout the summer and the autumn but there are a few exceptions to climbing roses too.

If you want your garden to be chock-full of roses throughout the month of June/July choosing a rambling rose bush is best as it will give you an overdose of roses that literally smother your garden for an entire month and they look absolutely amazing.

The climbing roses, by comparison, will not smother your garden and overwhelm with the number of roses produced although sometimes they will produce a large show of flowers but rather will give you flushes of flowers on a regular basis, still beautiful and long-lasting but without the same impressive impact, that being said it depends what you expect, as shown in the picture below, if pruned correctly they will give an amazing show.

One way to capitalize upon both is to combine climbers and ramblers so that you get the impressive feature of months-long rambling roses in June for instant impact early on and right next to the repeat flowers for the remainder of Summer from the climbing rose. If you plant a June flowering rambling rose right next to your repeat-flowering climbing rose you can have roses from June through September and even into the first frost.

If you have rambling roses, you will prune them by training them around something by removing older stems and cutting them down to the base. These pruned stems then get replaced by stronger, new branches which will fan out at the base. Rambling roses are very tolerant of diseases. Moreover, you don’t need to focus too much on deadheading and can even be left to defend for themselves, however, after a few years, they can get untidy.

Climbing roses need to be pruned in the winter. You should be nicer to these, without as much heavy pruning. It is recommended that you reduce the biggest leaders and then prune any side shoots. Most of the climbers have been highly bred so they are at risk for black spot. The best way to prevent this is to mulch directly underneath. If your climber is a repeat-flowerer you can deadhead it regularly to remove older blooms and encourage new blooms which goes for most climbing roses.

Training climbing roses are important, as it helps the plant to bend and coil which naturally inhibits the flow of sap. This is key to promoting more flowers. If you are preparing to train your climbing roses it is best to do it in Autumn when you can bend the new stems without breaking them. When you set out to do this, pick strong stems (be sure to wear gloves) and then curl them as necessary around your stakes, pillars, or fences.

Pruning rambling roses – how to prune in 5 easy steps 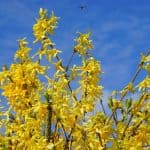