Pruning Honeysuckle – When and how to prune Lonicera

Lonicera, more commonly known as the ‘Honeysuckle’ plant is one of the most popular garden climbing plants and is often seen in many gardens throughout the UK. They are available as evergreen varieties, such as Lonicera japonica ‘Halliana’ AGM and the Lonicera Henryi. Deciduous cultivars include Lonicera periclymenum and the sempervirens varieties. These climbing honeysuckles are perfect for climbing over pergolas, fences and alternatively up walls too.

Most of these climbers have highly perfumed flowers. Honeysuckle plants flower in the summer and will grow amazingly well in full sun. They will also grow well in a partially shaded site too, where they seem to be less affected by the powdery mildew that can often be a problem with Lonicera.

The shrub varieties, which include the popular nitida ‘Baggesen’s Gold’ AGM and purpusii ‘Winter Beauty’ AGM, can be used both as hedging and groundcover plants. Known for being quite versatile plants that will grow in any well-drained soil, in full sun or partial shade. Often seen on industrial estates they make excellent groundcover plants and are often grown for their small, attractive and evergreen foliage.

Depending on the type of honeysuckle you have will determine if and when it should be pruned as not all types need pruning yearly. If you prune them incorrectly, and most importantly at the wrong time of year, you risk cutting off the flowering shoots which will result in a failure of the fragrant flowers that season.

A general rule is that all climbing honeysuckle plants should be pruned as soon as they have finished flowering.

The most common types, which most people are likely to have in their garden, include Lonicera periclymenum Serotina, Belgica and the dutch honeysuckle, Lonicera p. Graham Thomas. These are the ones that flower early on in the season, on the previous year’s growth. These should be pruned back in mid to late summer as soon as they finish flowering, cut them back by around one-third to healthy new growth, just under the flowering growth. At the same time remove any dead, diseased and damaged growth. Other varieties that flower on the previous year’s growth should also be pruned back after flowering.

More established plants that have been left unattended and have turned into a tangled mess can be pruned back hard to rejuvenate them. Cut back in early spring to around 2ft (60cm) tall and new healthy growth will appear in spring and summer, with growths of 2-3 metres to be expected to be achieved over the summer.

Evergreen Japanese Honeysuckle (Lonicera japonica), which includes the popular variety ‘Halliana’ flower on the current season’s growth and does not require any yearly pruning. Simply prune out any damaged, diseased or unwanted growth to keep it to your desired size in spring. Other varieties that flower on the current season’s growth also do not require pruning. 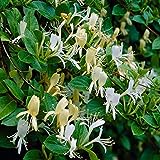 The most popular Lonicera shrubs are the evergreen varieties that include ‘Baggesens Gold’, ‘Silver Beauty’ and ‘Lemon Beauty’ and they are ideal as hedging and groundcover shrubs. They are best pruned 2 to 3 times a year to keep the shape from spring into autumn. If you want to cut them back hard to rejuvenate them, then this can be done by cutting them back to around 15cm (6inches). These are very hardy and will recover well.

Deciduous varieties that include Lonicera tatarica should be pruned back after flowering in late spring by cutting out old branches at a rate of 1 in 3 to new shoots. Any hard pruning should be done in winter or early spring.

All types of Lonicera are very hardy and can be pruned back hard with loppers and will recover. The worst you will do is cut off the flowering growth and have no flowers that season.