Pruning Acer Trees and Shrubs – everything you need to know

Pruning Acer Trees and Shrubs – everything you need to know

Pruning Acer trees is something that is usually not really needed. Japanese Acers should be left to grow naturally but branches below the canopy that cross or rub each other can be removed between October and January. You can also remove branches that ruin the shape of the tree if needed.

Japanese maples are beautiful trees regardless of the season. They bring to any garden the most delicate of leaves, beautiful fall hues, and arguably some of the most attractive branch patterns in the world. The two most common varieties include the Japanese maples such as Acer palmatum and the tree type Acers such as Acer platanoides ‘Drummondii’ Tree. The Acer platanoides is a larger version while the palmatum is a smaller, often weeping tree that most gardens integrate as their centrepiece. The Acer palmatum varieties do well in sun and become more foliated, requiring very little pruning to help them maintain their form.

If you have Acer trees less than 15 years old, you will probably see new growth that is very small, thin, with no side branches. Rest assured this is normal. In fact, many gardeners, anxious to encourage better form will prune these off. The problem is that doing so only encourages more of the small, whiplike branches. These are there for a reason and they need time to grow. As they age, they will get wider, cultivate those lateral branches, and create scaffold limbs.

Many people think that pruning Japanese acers in winter can help restrict the height it reaches. That’s not the case either. The tree will grow faster and taller if you cut away the thin, whiplike branches too soon. Now, this is not to say that you cannot prune your Acer. You absolutely can and once it has established itself, you should make a habit of it.

In general Acer only really need pruning to control the size and maybe control the shape but they often grow best when left unpruned to form there natural shape.

Other times it may need to prune your Acer is to remove crossing branches that are touching as these can become infected or if the Acer is overgrown and very congested. Is this is the case remove some of the inside side branches back to the central trunk.

How and when to prune Acers

Once your tree is mature, you can regularly prune so long as you do it selectively. That said, we recommend only pruning when necessary and pruning when the tree is dormant, usually, November to January is a good time to prune.

Pruning your Acer in winter means the leaves are not in your way, so you can get a clear image of the branch structure and with that, make perfect clean cuts. The reason winter is the best time to prune is that they produce the least bleeding sap in winter when pruning which can damage the tree. For this reason, it’s best to not prune Acers when they are actively growing.

If you want to prune the lowest branches, a process called “limbing up” you should remove one at a time. Then take a few days off and come back. If you remove many of them at once it can harm the tree. The best thing for your Acer is to separate your branches so that they don’t touch one another but are still overlapping with the scaffold shape, radiating in a spiral manner.

Remember that all cuts you may wound your plant, so if your Acer is in bad health, minimize the cuts you make. And to be as kind as possible, only prune when your tree is at its lowest energy and when it is really needed. 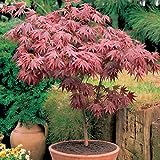 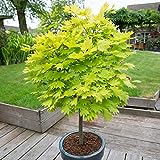 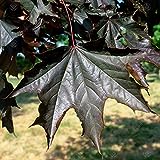 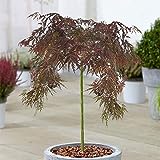 Top 8 Best Bird Baths with some of our favourite picks

Top 8 Best Trough Planters To Brighten Up Your Garden