WE PUT THE OLIGHT H2R NOVA LED TORCH TO THE TEST

The OLIGHT H2R NOVA LED Torch is an impressive multi-use illumination tool, what makes it a little special is that it works both as a handheld device independently, as well as a top spec headlamp with the included head strap and magnetic connection. This torch arguably boasts the strongest lumens in the industry and that has earned it the reputation of being the brightest single 18650 battery flashlight but with 5 different brightness levels, from a low reading light, to super bright 2300 lumens turbo mode, its one of the most versatile flashlights we have come across. As such, the OLIGHT H2R NOVA makes a great choice for wildlife excursions at night, hunting, camping, walking trails, and many other activities that call for different levels of illumination. Read on our OLIGHT LED torch review as we unfold every bit of this device and whether we think its worth considering as your next LED torch.

Before we get into the review in more detail, we would like to point out that we were sent this LED torch by Olight to review for free. However, this does not affect our review and we have no obligations to Olight for sending the product. This is a true tested review. We want to be fully transparent to our readers, now on with our review.

Quick summary: The OLIGHT H2R NOVA LED Torch is remarkably powerful and versatile. It is well-designed and easy to use with 5 adjustable light modes plus SOS type mode. A solid construction as well as water proof capabilities ensures the torch can withstand outdoor abuse whilst an industry-leading 5-year warranty is a major assurance of its quality. 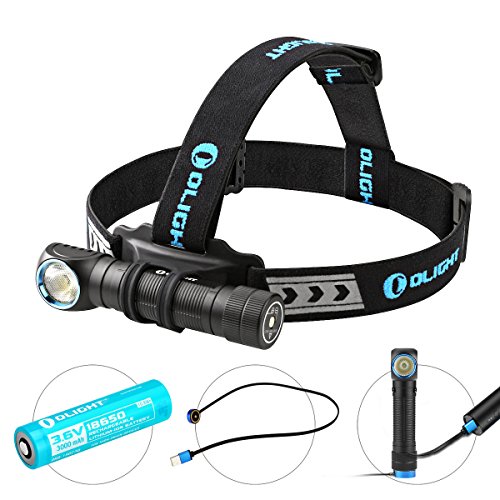 The torch comes in a nicely designed box with straightforward product specifications. The first impressions are stunning as you open the box to reveal the torch slotted in its compartment alongside another compartment carrying the other accessories.

What's in the box?

As mentioned earlier, this device functions as a handheld torch or a headlamp which we really like, depending on the need. If you want to throw an eye on your back garden at night, for instance, just take the torch in hand and go for a casual walk. Want to work hands-free? No problem. Simply put it on your head and you'll be good to go and it takes just seconds to attach the torch to the head strap as it magnetic with an rubber strap just to be double sure its secure. The headband is very comfortable and it does not wobble unnecessarily, making it perfect for activities such as running and cycling. What we really liked about the magnetic feature is that it hold the torch in place while you pull the rubber strap round, if it was not magnetic this would be much more difficult.

The main body is made from aluminium alloy and it seems very strong and substantial, it also feels very nice in the hand with the tiny groves ensuring a good grip. The design itself and the implementation was done with class in mind. We like the tough plastic at the front of the strap, which firmly holds the main unit in its place, while the underside is very comfortable when placed on your head.

OLIGHT designers also added a metal clip that allows for clipping the torch on your jacket or waistband which is very useful, the clip is also removable which good as its fits into the head strap perfectly with the clip removed.

In addition, the torch has a magnetic bottom that allows placement onto certain metal surfaces to provide another hands-free light.

The OLIGHT H2R NOVA has a waterproof rating of IPX8, which happens to be the highest on the IPX water ingress scale. The implication is that the torch can be submerge in water for some time without being affected in anyway. OLIGHT haven't mentioned how long it can stay submerged but we bet it can withstand more than 30 minutes in 1m deep water and still work okay.

We put this to the test but we didn't have access to 1m deep water so we placed it in a bucket of water for over an hour turn on and it came out just fine.

Olight say that this torch can withstand impact from a height of 1.5 meters, this test we could do and we dropped it many times from different angles and it faired just find.

This torch is a champion of performance. It has five brightness modes that are powered differently to suit a range of applications. The modes are activated through a press of a button during normal operation. The moonlight mode is the lowest which is activated by holding the switch down for over 2 seconds, this produces just 1 lumen. You can't do much with this mode except reading or writing maybe but it saves battery life and doesn't reflect to much light into your eyes like most other modes will.

Click the switch once, then by holding down the button, you can change the light mode to low, medium or high. Whether adjusting the brightness up or down, it increases or fades gradually so as to protect your eyes from sudden brightness shock.

Finally there is also a very bright turbo mode, simply quickly press the button twice to activate turbo mode at 2300 lumens, we warned this mode was very bright. You can activate this mode when it turned off or while in another mode is we found handy.

In addition, there's a button lockout function that prevents accidental mode activation. This torch is also smart in that it turns on to the mode that was in place when it last shut off.

Keep in mind that the light modes have different run times. These are listed below for the two versions of H2R NOVA LED torch:

There's also an S.O.S mode for emergency situations. It is activated by quickly clicking the top button from 3 times. This can be done while turned off or while turned on in another mode.

Below is pictures we took in the different setting to try and show how they compare, In the images its hard to photograph how bright they are. We found that in the pictures they look a little less bright than they actually were but hopefully it still gives a good indication of brightness.

The only level we could not photograph was 'moonlight mode' because the camera could not pick up the light. Thinks it time we invested in some new camera equipment.

We also tested the H2R NOVA in 'Turbo mode' in A dark room. Lights the whole room up very well.

Using one Cree XHP50 LED bulb, the torch produces a diffuse spotlight beam that is perfect for a number of activities. The beam distance is 153 metres. It spreads out with no sharp edges but blurs nicely as the beam diameter increases outwards. We were very impressed with how far we could shine the torch.

The H2R NOVA LED torch uses one 18650 lithium-ion battery, which comes included. We do really like that the torch lets you know when the battery is running low by blinking once every minute and then continuously blinks when it is really running out.

We are also very impressed by how it charges through OLIGHT's magnetic USB charging cable, simply hold the torch near the magnetic docking connection and it clicks together on its own, we really do like this design.

This is a great head torch with top-of-the-range features, however, it is on the more expensive side when it comes with LED torches, that being said, we think its worth the extra cost for the performance, build quality and amazing features you get with this model.

The obvious selling point here is multi-purpose functionality as most torches are either a hand type torch or head torch but not very often both.

The various light modes are useful and easy to adjust once you had a play around with it for a while. As much as the torch can produce up to 2300 lumens, we think the 600 lumens on the high setting are ideal for most activities.

The highest setting is ideal if you need to shine some light over a large area, however it does get really hot in this mode so its probably not suitable for using for longer periods of time for this reason.

The device has a really strong construction with excellent waterproof and shockproof properties which is impressive. its a little more expensive than many other torches but we think for the design, versatility and performance, this torch still offers excellent value for money and when you consider it has a 5-year warranty, we think the OLIGHT H2R NOVA LED Torch is a worthwhile investment.

If your looking for a more affordable or smaller, slightly less powerful torch, you may want to take a look at the Olight S1R Baton we also reviewed here

Our website supports our amazing readers with countless hours of research and testing to help you find the best product so you don't regret making a purchase. You support us through our independently chosen links, which earn us a small commission and cost you nothing but helps support our research.

You may find our other torch reviews useful below: