If you are growing plants, you know that they can succumb to many issues. Different seasons, weather, and other environmental factors can manifest in the form of wilting, discolouration, even powdery mildew which we are going to focus on in this article.

And the problem with certain outbreaks is that if you do not prevent it, or treat it once you see it, it can spread until such time as all of your plants are affected and mildew is one such fungus that affects many plants from fruit bushes to ornamental shrubs and perennials.

So, what is powdery mildew and how can you prevent it?

Powdery mildew is a fungus, which means it becomes a fungal disease when it affects your plants. When a plant has mildew, you will see it on the foliage first, then the stems, and sometimes even the flowers and fruit. The fungus, effectively, covers the plant surface and looks very unlightly.

Most fungus is found on the surface of the plant. The fungus sends feeding structures inside the cells of your plants, which is why the plants are weakened. The spores themselves are microscopic, but they are airborne which means they can spread from surface to surface easily, especially in wet conditions where nothing more than a splash of water can move them.

Which Plants Are Susceptible?

There are many plants susceptible to mildew, especially ornamental and edible plants and if we were to try and list every plant it would contain thousands of plants but is just a few popular plants that are often affected.

This is not a complete list, but it does cover a handful of those most susceptible. It is important to understand that powdery mildew covers a range of outbreaks such that the powdery mildew that is on your peas is slightly different from the one on your apple tree.

Mildew presents in the form of powdery patches of fungus, hence the name. These patches usually appear first on the upper or lower parts of the leaves, and then on the rest of the plant. Sometimes the tissue of the plant is distorted or stunted as a result, like the leaves on roses. In other stages, the infected tissue does not show much in the early stages, but as the fungus spreads, it starts to discolour the leaves.

Be advised that it can be difficult to see at times, especially if the majority of the fungus is on the underside of the leaves. This is quite common with rhododendron leaves.

Treating mildew once you have it

Once you see the mildew, it is important that you remove any infected parts of the plant and destroy the material. If you leave it, then the infectious spores can spread. And if you fail to destroy it, and instead leave the fallen debris on the ground, the spores can wait throughout winter and attack again the following spring.

Given the location of powdery mildew, you can use chemical controls quite easily. Fungicides are perfect for fast and easy treatment. If you have edible plants with a mildew problem, like cucumbers, Tebuconazole with trifloxystrobin is best. Regular tebuconazole can be used on ornamental plants. If you feel so inclined, or want to tackle two garden problems with one application, you can use a combination of fungicide and insecticide to get rid of disease and pests simultaneously. RoseClear Ultra spray is a good option for this but is not suitable for edible plants. 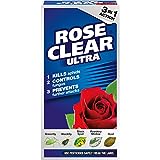 Obviously, the best way to handle mildew is to prevent it. Preventative measures can help the most when it comes to maintaining healthy plants.

Start by finding suitable locations for any plant you grow, including the right amount of sunlight, shelter, and soil. With regard to soil, always monitor things like moisture levels in the soil so that you do not accidentally provide an environment in which the spores can grow. You should always water regularly when the weather is dry but avoid overwatering. Help ensure good drainage at the same time by adding mulch, layers of stones at the bottom of pots, and good soil.

Try not to plant anything too closely together to allow good airflow, and to follow proper pruning. If things are grown too close together, or they become that way with time, it cuts off air circulation which keeps the environment moist and hospitable to fungus. When you do water, try to do it early in the morning or late in the evening, not during the day when the sun will cause it to burn the leaves or dry out too quickly.

Too much fertilisation can also impact, particularly too much nitrogen.

Always check all parts of your plant for early signs. Do not skip examining the underside of the leaves, as this is often where it starts, and often where it is missed.

Learn about Black spot on roses which is another very common disease to watch out for.

How to grow Japanese anemones