How to overwinter dahlias

Dahlias are a beautiful summer flower but winter is not their favourite season. They need to be taken out of colder gardens where frost may be hard in freeze deeper than there first few inches of soil and stored over winter. If you leave them in the garden and you have a period of very cold region freezing temperatures will actually kill them.

The good news is that lifting them is pretty straight forward and nearly always guarantees they will produce another fantastic show the following summer.

So, can you leave dahlias in the ground over winter?

That is really contingent upon where you live. If you happen to live in a mild area of the county where the ground never freezes two deeply during the winter, you can theoretically leave your dahlias in the ground over winter and as long as you add a few inches of mulch such as compost or leaf mould over the bed and the soil is free draining they will be just fine. However, overwintering dahlias in the ground in regions where you have freezing temperatures regularly will kill them off and they may not survive thereafter.

Overwintering dahlias in the ground

If you live in a milder part of the UK you want to start by covering the soil around your dahlias with mulch. You should have between 3-6 inches of mulch which can be comprised of wood chips, leaf mould or other organic materials and compost.

The following spring you need to remove the mulch and start to give the soil opportunity to warm up. Between March or April, you need to dig up and/or tubers, and then replant them if you want to cultivate the best flowers although many gardening just removes the mulch and leave them as they are.

Overwintering dahlias tubers by lifting them

If you live in an area that’s too cold to leave your dahlias outside you can overwinter indoors. This is the best way to give your dahlias a break during the winter months and is believed by many gardeners to encourage more floral production the following spring.

You have to start by digging up your dahlias immediately after the first frost. The first frost will kill the leaves and stems. They will start to turn black after frost. This forces the tuber into dormancy for the winter and as soon as this happens you can trim your Dahlia back to anywhere between 5 cm and 15 centimetres. This will make it much easier to remove the roots.

Wait until it is not raining before you dig up the plants. At that point use a garden fork to carefully dig up your tubers, pushing the soil about 15 cm away from the flower all the way around the perimeter to loosen the soil near the tuber without actually piercing it. If you don’t have a garden Fork you can always use a spade but be extra careful.

During this time you need to be cognizant of the tuber and avoid damaging the outer skin. If you do that it leaves the two more susceptible to diseases and starting to rot when being stored.

Once you have removed it from the ground it’s time to clean everything up by trimming away and the dead stems, breaking off the soil around it with your hand, we don’t recommend washing the tubers with water a this can sometimes cause them to rot later on. This simply reduces the chances of diseases while the plant is being stored over winter.

Before you store your dahlias it’s time to let them dry out. You need to lie them on a flat surface in someplace protected against sun and wind. It’s best to set them on something like newspaper and allow them to dry for around a week to ensure they are very dry and ready to store. You can also hang them upside down to dry them off which some gardeners prefer.

At this point, it’s time to store them properly. It’s in your best interest to coat each tuber with Bordeaux Mixture before you store them so that they are protected against fungal growth over the winter. Once they have dried you can place them in a box lined with newspaper and then cover each of them with a layer of peat moss followed by another layer of newspaper on top of everything else.

Close up the box and if you have different varieties, label each box accordingly. If you don’t want to use peat moss you can also store them in boxes or trays that have compost, sand, or potting soil. No matter what you use you do need to store them in a cool frost-free area such as a garage, shed or cellar. If the temperature freezes it will kill your tubers so don’t store outside.

Every month you should check the tubers for disease and sprinkle them with water if they’re starting to dry out. When Springtime comes you can move that container or box under a window so that they make the transition and start to warm up again even if it’s not yet warm enough outside. Come springtime, you can replant your overwinter tubers either in pots to start them off or in the ground but don’t do this too early as the frost can damage new growth in spring. 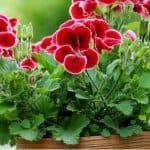 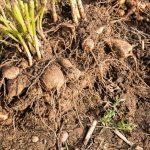 How to split and divide dahlias