How to force rhubarb

How to force rhubarb

If you are growing rhubarb and you need to know how to force your rhubarb, doing so at the end of winter will give you an early harvest come spring. Below we will explain exactly how to force rhubarb successfully.

The key to successfully forcing rhubarb is to prevent any light from reaching the crown. Doing so successfully will produce very pale, delicious stalks that are great for culinary purposes. If you force rhubarb the stalks are much softer and sweeter compared to rhubarb that naturally reaches maturity in summer so it’s well worth forcing some of you’re rhubarb.

What you will need to force rhubarb

in order to successfully forced rhubarb, you will need obviously your plants, as well as some straw or bubble wrap if you live in a particularly cold area to insulate the forcer, a large rhubarb forcer (for those serious gardeners who plan to do this regularly) or large pot, or similarly large bucket or bin as well as some black masking tape to cover up any holes if needed.

How to Force Rhubarb

In order to increase the nutrients and help the rhubarb grow, you should add some compost, this could be homemade compost or some well-rotted manure to the base of the crown. If you notice any old leaves or weeds in the area, remove them now as well.

Taking the rhubarb forcer, pots, or bucket, cover the crown of the rhubarb. If there any holes, cracks, or divots through which light can penetrate the crown, use your black masking tape to cover them. Again, the entire purpose behind this is to prevent any and all light from reaching the plant.

You can expedite this process by insulating whatever covering you have over the crown with the straw or bubble wrap you brought. This only really needs to be done if you live in one of the harsher parts of the Uk.

If you do this properly, you should be able to harvest your stems in about eight weeks to ten weeks.  Ideally, you want the rhubarb shoots to be between 20 and 30cm in length when you harvest and they should look something like the picture below.

Do not be shocked by the color. Because they were deprived of sunlight, they will not have produced any chlorophyll and chlorophyll is what gives the leaves its colour. By limiting the amount of sunlight to which the stems were exposed you forced the stems to grow faster because they are searching for that light. Of course in the process of searching for that light, they end up pale but sweet and delicious which is why this process of forcing rhubarbs is so popular.

You can gently pull the stalks out of the crown or cut them if needed with a knife or secateurs and then remove any leaves before you clean and prepare them.

Note:  If you forced rhubarb, do not harvest the crown that summer or the following year. The process of forcing rhubarb severely weekends the plant and the stems won’t grow very strongly the season thereafter. This is why you should only force a small amount of your rhubarb every year. 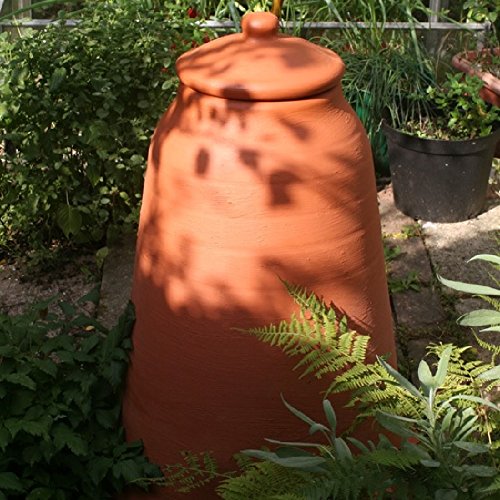