Hostas are great plants to grow in shaded areas. They will last for many years with bold foliage filling your garden with colour from spring through Autumn. They can be easily divided to make new plants too. These perennials are carefree with few problems with the exception of slugs. However, from time to time you might notice a problem with your hostas or you might simply want to prepare against common hosta diseases or pests.

Learn how to divide hostas in this article

Firstly, in terms of hosta diseases, there are really no common diseases to look out for as there are with other plants. These plants are particularly disease-resistant with the exception of anthracnose. This is a fungal disease that arrives in warmer, wet weather and produced large, irregular spots with a dark border, spots which eventually fall out and leave the leaves with a torn appearance often mistaken for pest problems.

Still, with just one common disease, it does not mean they won’t succumb to problems. They do need protection against direct sunlight. If they are planted someplace with too much sun you will see brown, scorched leaves. The same outcome is brought about by shaded areas that are allowed to get too dry.

If, for example, you have a hosta with holes in leaves, it is likely pests who are eating their way through your foliage.

While free from diseases, hostas do battle with snails and slugs. These are the biggest issue you will face. They will strip away all of the foliage if you do not take precautions. They often forage at night, leaving small holes in the hosta leaves and silvery trails throughout the garden. Beer traps are an effective way to lure them away from your plant and controlling them effectively as ae slug pellets and even copper tape if you grow them in pots.

Vine weevils can be problematic if you are growing in containers, though the containers will thwart the problems brought about by the snails and slugs. The weevils will leave irregular notches along the perimeter of the leaves, and later their larvae will eat the roots and crown resulting in wilted, yellow foliage and this is usually the worst problem caused by vine weevils as they can often die and the damage has been done before you notice. You can use Provado ultimate bug killer which you use as a drench to soil the soil which kills the grubs.

Deer and rabbits can have an apatite for Hosta leaves

Deer and rabbits also like to grab a snack of hosta, so if your area is prone to visits from such animal friends, they might also be to blame.

So if you are noticing problems with your hostas, use the process of elimination to investigate the culprit but 9 out of 10 times its usually slugs and snails that are the cause.

Dividing hostas – How and when to divide hostas 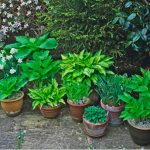 Planting and growing hostas in pots or containers