Without pollination, your plants won’t be able to produce enough fruit or seeds, which is not just upsetting to the overall quality of your garden but can inhibit food production and food sources for wildlife as well. Honey bees, in particular, are an essential part of the agricultural world and it’s only through pollination that we get seeds and crops year after year.

All about the bees

In the UK there are over 250 types of bees and bumblebees. Some are solitary, some are very social and like to gather regularly, and they all feed on pollen and nectar. The nectar is converted into honey and that’s what is used to feed the younger insects.

Gathering nectar is actually what causes the bees to brush their furry bodies against the stamens of the plants and in so doing they get covered in pollen. We don’t often think about this because it’s hard to witness in person but as they move from flower to flower they transport the pollen along the way, almost the same way as you would shake off water from a raincoat during a storm. The pollen then gets distributed to the stigma of the flower and eventually, you get a seed. It’s almost as though they don’t realise they are doing it.

And this is where you can help. By growing a lot of plants and not just one, you can create a garden that’s enticing to bees from the middle or end of spring all the way through to the beginning of autumn. Having different plants over the course of this growing season is particularly important because as mentioned there are over 250 types of bees and they emerge at different stages throughout the season and also hibernate at different times too. Some solitary bees and bumblebees might get moving as early as the end of February or the beginning of March.

Having a mixture of plants that flower early can help these early bloomers get a head start. Of course, summer is the biggest time for bees so the more plants you can have flowering during the summer the better off you will be.

You don’t want to pick over hybridised plants because these modifications effectively mean the plants are sterile, they have no pollen or they’re designed to be so densely packed that the bees can’t even reach the stamens. Plants that produce small flowers are great for this, especially plants that have big openings or easily accessible lower pedals as a landing pad. Slender spikes that produce hundreds of small flowers like Lavender are also great, as long as they don’t obscure the bees from getting the nectar.

If you have some of the best perennials for bees you can expect a well-pollinated garden that gives you ample benefits.

So what should you include? And how do you make sure you have a great combination?

The best perennials for attracting bees into your garden

Below are the best perennials for bees. If you mix and match those that bloom at different times of the year with different physical designs and flower sizes you are sure to provide a great garden for bees.

The Perovskia ‘Blue Spire’ (or Russian Sage as it’s also commonly known) flowers in the middle of summer and it’s a somewhat fragrant perennial that is certain to bring in ample bees to your garden.

It starts off green and produces the adorable violet coloured flowers that run up the length of the green stems between the middle of summer in the middle of autumn. The best thing is while it does bloom a little bit later in the season it stays there for much longer.

The Butterfly Bush, as the name suggests, brings with it plenty of butterflies and bees. The ‘Royal Red’ Butterfly Bush, in particular, is another late flowerer that shows up at the end of summer and continues to flower through to the beginning of autumn. It’s very appealing with the panicles of brightly coloured fuchsia flowers, these are small and collected in the shape of a cone sticking straight out in all directions. 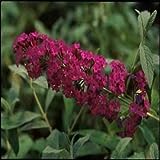 The Salvia nemerosa ‘Caradonna’ is one of the early bloomers and it is a great perennial to jumpstart your garden to get everything blooming, early on at the end of spring, around June.

It grows in large masses and works well in any type of garden, including pots as well as border gardens. In fact, it does better if you’re able to cultivate it in large groups, so planting multiple Salvia plants in a single container and dotting them around your small balcony or patio is a great way to capitalise upon smaller spaces.

The Lavender angustifolia is, of course, a great addition to any garden because Lavender offers both a delightful colour and aroma. This is a petite cultivar so it won’t take over the space, it grows well in rock gardens or dry, hot locations, for example, on a patio in a container.

This variety of Lavender blooms from the beginning of summer and it stays blooming through to the beginning of autumn with its bright green foliage and its richly purple flowers. The foliage is actually around most of the year. 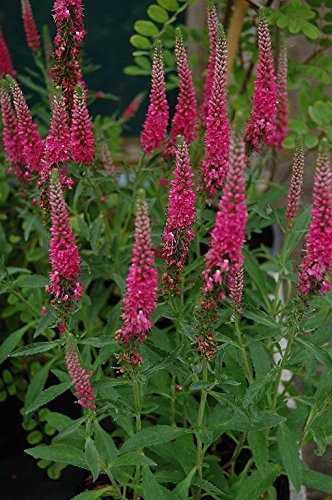 If you want to offer an extended flowering season for your pollinators, the Veronica Spicata Rotfuchs ‘Red Fox’ is a great choice for you to add to your garden. A spiked seed well, it will grow in a low, sprawling habitat and give you two flushes of flowers throughout the season.

This is a native perennial that will grow well in just about any garden and its versatility mean you can put it in containers on your patio or directly in your garden flowerbeds. It’s very tolerant of drought and heat, it will grow in shade or clay soil. You can keep it producing beautiful sunflowers all summer long by deadheading the spent flowers frequently.

This Hibiscus is a perennial that produces large flowers, so you will no doubt see when a honeybee lands on them. It’s another late bloomer that shows up around the middle of summer, sometimes the end of summer. But it will certainly catch the eye not only of the honeybees but of anyone walking around your garden.

This is a special cultivar called ‘Bee Balm’ and more specifically the Bergamot Monarda Gardenview Scarlet. It is one of the more colourful varieties of Monarda that you are going to find, and one of the more disease-resistant. This variety has a tighter and more refined growing habit, so instead, like some of the old cultivars that grow up and then flop over, this perennial will stay in a tight bunch.

The stunningly scarlet red flowers are sure to draw your eye in the middle of summer and that of bees. 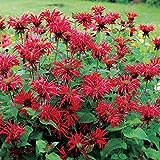 The ‘Blonde Bombshell’ Butterfly Weed is a perennial that is a great source of food for Monarch butterflies. It will also draw other pollinators to its tiny clusters of bright yellow flowers, like bees.

This is another way to get your garden blooming early, as this perennial will start to produce flowers at the end of spring. It’s a perennial that gives a lot of size and colour to your garden so make sure you have the space for it. If you have a larger garden this is a wonderful way to attract bees and other pollinators to a given area where perhaps you are trying to grow ample flowers or vegetables and fruit.

You can plant them next to a giant container garden or alongside the edges of your garden. The deep tap roots make it very heat tolerant and drought tolerant. Be advised though it lives for a long time and will likely outlive you, so once you decide on its permanent home it’s going to be just that, permanent. You will find it almost impossible to move once it’s been established.

On the note of cones, the Echinacea purpurea doesn’t actually have cone-shaped flowers and it is a native prairie flower that will attract bees easily.

As it is a native prairie flower it’s also very tolerant of drought, which works out well during the summer, especially if you are trying to conserve water. It flowers in the early summer so it will be one of the first to show up and it remains in bloom throughout the autumn. 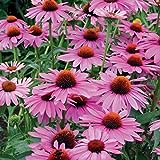 Ornamental onions are delightful perennial to have in the garden because of their giant round balloon-shaped flowers. They look like tufts of clouds with their beautiful pom-poms and purple colour, colours can actually vary depending on the variety you have. The green foliage and the flowers alike will attract rabbits and deer as well as necessary pollinators throughout the summer. This one is more of a late bloomer and it will manifest those pom flowers in large clusters around the middle of summer to the end of summer. 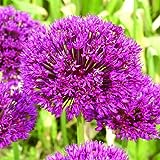 Overall, each of these perennials offers you a wonderful opportunity to bring one of the 250 species of bees and bumblebees to your garden as well as other pollinators, like butterflies. By growing more than one, you can, of course, attract the more solitary species and those that travel in larger social groups no matter when they come out of hibernation.

Related articles you may find interesting

How to sow perennial seeds using only a few cheap accessories

The best perennials for shade, where most other plants fail

How to stop slugs coming into your house

12 of the best perennials for shade