Have you ever given or received Amaryllis for Christmas? These flowers are showy and stunning. Their real name is Hippeastrum. But how do you take care of this new gift, and how do you continue to bring it back year after year? What if you just want to grow your own from a bulb which should be planted between October and January.

Plant bulbs between October and January

The bulbs are very tender and they need to be planted inside in a pot before you move them. The bulbs should be flowering about six or seven weeks after you have planted them indoors in your container. They should be planted sometime between October and January as already mentioned with the earlier date being best to try and having flowers over Christmas.

When you are ready to plant the bulbs, add multi-purpose compost into your pots. The pots should be ever so slightly larger than the bulb itself, ideally, you want to choose a heavy pot to help keep the plant stable and upright when it flowers. When you place the bulb inside the pot about two-thirds of it should remain above the surface.

A room as 21 degrees if perfect for growing Amaryllis

Once planted, the container should be placed in a well-lit area that remains at around 21 degrees C so most homes are well suited to growing them. You should only water sparingly until such time as you see the new leaves develop on the bulbs after which you can water more regularly when needed. A top tip is to never want to water so much that water collects in the saucer underneath the container but you also never want the compost to dry out.

You can turn the pot regularly so that it grows straight up and doesn’t grow toward the light. If you’ve ever had indoor plants but you kept in one area of your home you have probably noticed that the leaves will naturally move toward the light so you can keep them growing straight by simply rotating the container on a regular basis.

Stake large flowers varieties to stop them flopping over

If you were given a cultivar that produces very large flowers you should stake the plant to help give it support for the extra weight. Once you see flowers developing you can move the plants someplace cooler where the temperatures hover around 17 degrees Celsius for the remainder of the flowering time.

What to do after flowering

Cut flower stalks back and place outdoors for summer

After your hippeastrum is done flowering, you can cut down the spent spikes to the base but don’t cut away the leaves just yet. You can continue to carefully water and apply a balanced fertilizer on a weekly basis, most house plant feeds will be fine for this. The bulbs within the pot can be kept in a greenhouse or outside during the summer so long as they are protected against direct sunlight which will scorch them so somewhere with a little dappled shade is perfect.

Move back indoors from around September in a cool room

Once September rolls around you can move the plants someplace cooler where the temperatures are around 13 degrees Celsius for 10 weeks. At this stage, you should also cease feeding and reduce watering so that you force the plant into a semi-dormant state.

When this is over, you can cut off the remaining old leaves until they are approximately 10 centimetres from the neck of your bulb, move the plants someplace cool for their dormant period. Replace the top three centimetres of compost with new compost and then start growing the new bulb the same as you did when you received it as a gift or purchased it yourself.

Ideally, they need repotting once every 3 years

If you continue to protect your hippeastrum year after year you will need to repot it approximately every three years between January and March after it has flowered.

If you want to propagate you can do so from the bulb offsets. You can also grow them from seed but that can take up to 6 years to fully flower so most people don’t do this. In terms of growing the from bulb offsets, after about three or four years after you’ve had the plants flowering it will produce offsets which will be perfectly identical to the original parent plant. Between January and March when you are repotting, ideally you want to separate the offsets. You want offsets that have their own roots. Place them into a separate container with the same compost type of multi-purpose compost in the same method used when planting the original bulb.

There are plenty of varieties available in bulb form from around October but flowering plants usually become available around Christmas time. Some of the most popular including Hippeastrum Papilio as pictured above include the following:

Why won’t my Amaryllis flower

The biggest problem you will face is the failure to flower. This is brought about by many issues. When you are growing them, the bulbs might not flower if you allow them to dry off early on. If you put them someplace far too shady without enough sunlight or warm or you underwater them the summer prior, it can all Impact how many flowers you see if any.

The next biggest issue is the fungal diseases. Indoor plants, in particular, run the risk of fungal diseases and bulb pest attacks if there is enough circulation or they’re overwatered. If you put the containers outside for the summer make sure you prevent slugs and snails from eating away at your plants. Tray and allow copper tape around the pots to protect them from slugs if needed. 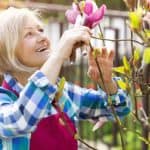 Pruning magnolias – How and when to prune magnolias